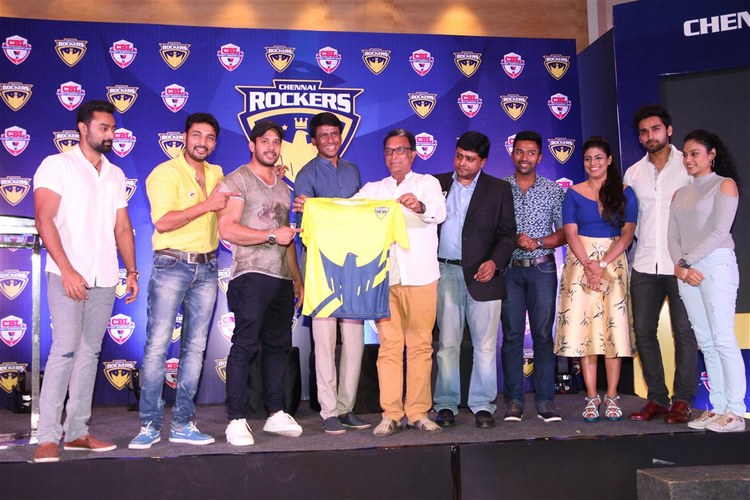 Until few days ago Badminton was never in the popularity chart. All we celebrated is Cricket. But after the silver in Olympics, badminton is on anywhere and everywhere.

In this back ground, what will be the enthusiasm level if sports and entertainment joins together. The answer will be unveiled by the upcoming CELEBRITY BADMINTON LEAGUE- 2016 (season 1). The team Chennai Rockers that is representing Tamilnadu has revealed their team’s brand ambassador Actor Madhavan, motivator Amala Paul and Captain actor Aarya at Hyatt Regency, Chennai. The grand event witnessed the presence of their team players (Celebrities) actors Prasanna, Shanthnu, Munna, Abhinay, Amitash, Vaibhav, Bharath, Ineya, Rupa Manjari and Gayathri. It is to be noted that the Anthem and Team jersey of Chennai Rockers was launched by Veteran actor and Nadigar Sangam President Nasser.

The launch event had its high point when actor prasanna and actor Bharath enthusiastically competed in 50+ Push Ups, on a friendly note. The well-built athletic actors complimented each other after this.

“Those days when we go and buy a cricket bat, the shopkeeper will say that ‘it is Sachin’s bat’ and now they are saying ‘it is PV Sindhu’s Racket… Thanks to sindhu for making us proud. CBL will act as a unique platform for celebrities those who want to prove their badminton skills. We just wanted to have a passionate team for CBL and right now they are standing in front of you… Only one bond connects us all together… It is the passion for Badminton. We are quite sure that our chennai rockers team will rock in this CBL… “Says CR Venkatesh, the owner of Chennai rockers team confidently.

“A new Era has begun in India. It is Badminton. I am very much delighted to launch the Anthem and Jersey of Chennai Rockers. I really appreciate Mr.Hemachander for bringing this new idea and it is good to see some young and passionate women in the team too.As the President of SIFAA iam confident that my boys who constitute this team will bring glories to the team representing Tamil Nadu. I hope that Chennai Rockers will establish more PV SINDHUS through this Celebrity Badminton League… All the very best to the young and talented team Chennai Rockers…” Says Nasser, veteran actor and the president of Nadigar Sangam in a positive tone.