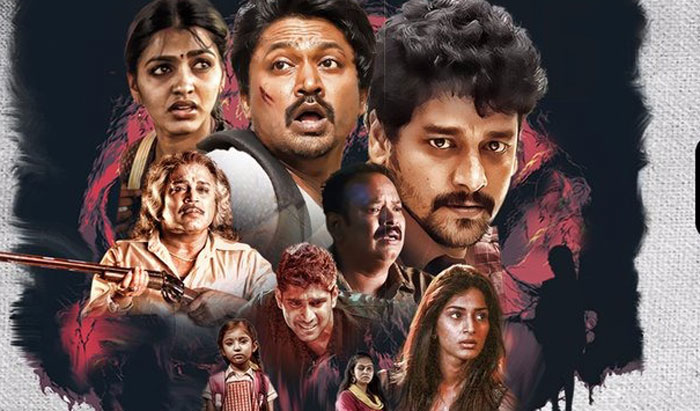 Vizhithiru is about four different stories hyperlinked together with the climax happening in one night.

Viddharth who goes to rob one of the houses finds Dhanshika, also a thief, tied up in a marriage costume. He helps her to escape from the place. Though the duo are together they secretly plan to escape with the looted jewels.

Meanwhile, Krishna comes to Chennai in the dream of going abroad but loses his purse and ends up driving a call taxi. Saran, a journalist, is murdered in his car as he had some documents related to a politician.

The murderers also plan to kill Krishna, the only witness of the death. Similarly, Venkat Prabhu,a blind man living with his children, is in search of his lost pet dog.

All these four different stories intersect at one point and what happens after that forms the rest of the film.

With an ensemble of cast each lead character had played their part well. Viddharth, Dhanshika and Krishna have lived as the characters and Venkat Prabhu has portrayed the role of a visually challenged man effectively.

Individually all these four sub plots are interesting and entertaining. However, together they seem to get mixed and confusing for the audience to understand what is going on.

Director Meera Kathiravan has got the best out of the characters but has struggled with the screenplay. The portions where the story intersects takes a long time to happen.

Music by Sathyan Mahalingam and cinematography of Vijay Milton and R V Saran have captured the night life beautifully during which the climax takes place.

Vizhithiru is a movie which has some interesting subplots but struggles to put them together.